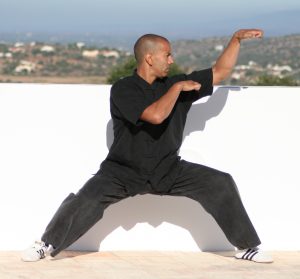 Commenced Martial Arts Training in 1979, studying Kyokushinkai Karate with Roy Banton and Joe Claronino in Tottenham College North London. Studied Shaolin Kung Fu under two Malaysian instructors and started teaching in 1988.  In 2000 formed Shaolin Quanshu with the late Sifu Norman Morrison. Qualified in 1996 as a Fitness Instructor with the YMCA and is currently working as a One to One Coach with an established and diverse client base. Through life experience has a great understanding of self defence, fighting psychology and the elements of character development found by training in a disciplined Martial Art

Has completed several physical challenges, usually running or cycling, for charities such as Breakthrough Breast Cancer, Action Medical Research, Geoff Thomas Leukaemia Foundation, Barnet and Chase Farm Hospitals Trust and will continue to support charities in the future as long as he is physically able!

Believes that Martial Arts gives the ability to enrich life mentally, physically and spiritually and that it teaches a degree of humility and respect not often found in many sports.

Places a great importance on giving support to all his students in their life goals whether they be academic, physical or work related and emphasises balance in life without losing passion and has been  assisting the teaching of the children since March 2017.

Thinks that a majority of people, can benefit from the training if effort is put in and would like to be given the opportunity to pass on the knowledge he has gained over the last 43 years.

Never asks anyone to do anything he hasn't done, wouldn't do or can't do and believes that everyone should have a passion for something in life, no matter what it is. 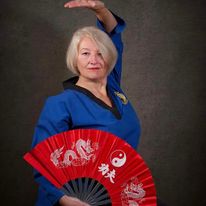 Began martial arts training in 1982 studying Shaolin Kung Fu in Paddington and Golders Green. In 1986 gained her Black Belt. In 2001 qualified as a YMCA Professional Gym Instructor and Circuit Training Level 2. Has taught many womens self defense courses.

At present is involved in the coaching of the classes. Is a senior instructor and takes partin the examination process for student gradings. Is greatly involved in the overall administration of the club.

Teaches 1-2-1 sessions in martial arts fitness and strength coaching, flexibility, fitball, weight loss, & cardio. Is a qualified Pilates instructor and has studied the physiological adaptations of sport throughout the different phases of womens' lives. Has a broad and diverse client base, some of who have been with her for many years. Feels that involvement in Martial Arts brings so much to her life. The training a great motivator, it builds confidence, is a  fantastic workout and the opportunity to meet some great people has lead to life long friendships.. 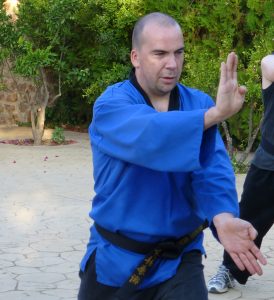 Gained 1st Dan Blackbelt in 1993 aged 17. Over the next 5 years went on to study a variety of styles including Wing Chun Kung Fu and Shen Chi Do.

In 1998  was introduced to Shaolin Kung Fu in Southgate and began learning under the tuition of Sifu Adrian Browne. Travelled the world for a year and upon  returning in the year 2000, joined the newly formed Shaolin Quanshu Kung Fu style created by Sifu Adrian Browne and the late Sifu Norman Morrison.  In 2010  achieved 1st degree Black Belt and since February 2011, has been teaching the children's class. Took the 2nd Degree Black Belt in March 2013 and continues with his training in Shaolin Quanshu

Believes in the skill and character development of all the children studying under his coaching, helping them to reach their full potential..

There are no upcoming events at this time.

This website uses cookies to improve your experience while you navigate through the website. Out of these, the cookies that are categorized as necessary are stored on your browser as they are essential for the working of basic functionalities of the website. We also use third-party cookies that help us analyze and understand how you use this website. These cookies will be stored in your browser only with your consent. You also have the option to opt-out of these cookies. But opting out of some of these cookies may affect your browsing experience.
Necessary Always Enabled
Necessary cookies are absolutely essential for the website to function properly. This category only includes cookies that ensures basic functionalities and security features of the website. These cookies do not store any personal information.
Non-necessary
Any cookies that may not be particularly necessary for the website to function and is used specifically to collect user personal data via analytics, ads, other embedded contents are termed as non-necessary cookies. It is mandatory to procure user consent prior to running these cookies on your website.
SAVE & ACCEPT